Please help us in fulfilling our mission to make a positive impact on both a local and global scale!

The Forever is Tomorrow Foundation

The Forever is Tomorrow Foundation’s Founder, Scott Burton was born with serious kidney damage caused by a posterior urethral valve blockage. Doctors told his parents to prepare for the worst; he was not expected to live more than two days. Surviving against the odds, Scott spent his childhood in and out of hospitals with the knowledge that each visit might conclude with a diagnosis of complete kidney failure. Just before his twelfth birthday, he began dialysis and was placed on a transplant list. After four years on the list, he received a cadaver kidney and began film school. The next three years were a struggle between the demands of college and repeated anti-rejection treatments intended to keep the kidney functioning. By the end of the next year, the kidney was determined to be too poorly matched and dialysis resumed. Scott received his undergraduate degree in Media Studies with a Concentration in Film and Television Production from The University of North Carolina at Greensboro in 2010. He completed the entire program while undergoing dialysis treatments three times a week. He has been on the transplant list for thirteen years.

With an interest in creative writing and a background in film production, Scott is committed to raising awareness about kidney disease across a wide spectrum. The Forever is Tomorrow Foundation will help dialysis patients manage the complex emotional trauma of their illness by providing a forum where they can share their stories and hear the voices of others. The foundation will also produce short and long-form documentaries about patient experiences during dialysis, the uncertainty of waiting for a transplant and new medical research on the horizon. With your support, our immediate plans include: producing short public service announcements to raise awareness about kidney disease, and finishing production of a feature-length documentary combining Scott’s story with an analysis of contemporary challenges and cutting-edge research related to organ donation and nephrology and developing a web forum for mini documentaries telling patient stories 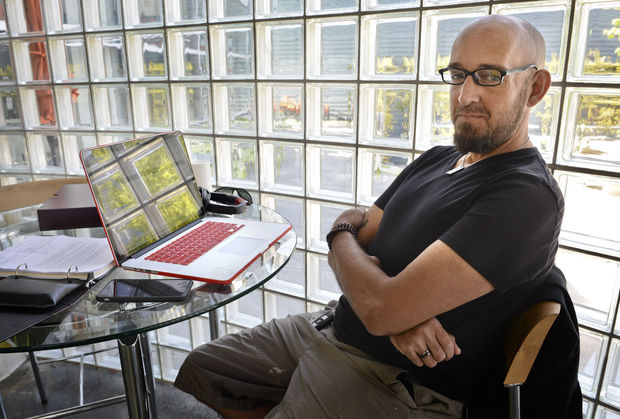 On August 31st, Fox 8 – WGHP did a story on Scott that aired on the six o’clock news in the Buckley Report, you can read about the story and watch the video on their website here:
http://myfox8.com/2016/08/31/piedmont-triad-man-raises-awareness-for-kidney-disease/

On May 29th 2016, we celebrated our public launch with a front page write up in the Arts Section of The Winston-Salem Journal, please click the picture below and read more about the driving force behind The Forever is Tomorrow Foundation:

The Forever is Tomorrow Foundation has already begun on it’s mission, launching 2 PSA style videos prior to going public. These videos drew from many statistics focusing on the fact that 13 people die everyday waiting for a kidney. With the original videos being launched on Facebook, as of 7/27/2016 they have received more than 15,000 views combined. Just recently, they have been uploaded to youtube with a channel created to be home to all future videos, watch these 2 videos below:

We have already entered production on a feature length documentary telling Scott’s story and diving into statistic and plan to end the film by highlighting research on the horizon. While the film is being done with the help of many volunteers, we still have costs associated with trying to cover the cost of travel for our crew to film with various research centers. Assuming the funds can be raised, we aim for a early spring 2017 release! Below is a montage of some clips taken from the interview with Scott’s parents as they discuss his drive and fighting spirit:

© 2023 The Forever Is Tomorrow Foundation
Design By Vitruvian Vector